The closure will take place over the next 180 days. AMR will redirect these non-emergency resources to support core emergency operations.

American Medical Response (AMR), which has served Los Angeles County for over 50 years, has made the difficult decision to close the Company’s Los Angeles County non-emergency operations. The closure will take place over the next 180 days. This division employs over 170 employees, including EMTs, paramedics, dispatchers, and nurses, and provides approximately 28,000 non-emergency ambulance transports a year.

California has not increased Medi-Cal reimbursement for private ambulance operators since the late 1990s. The current Medi-Cal base rate for private ambulance services sits just above $100, which is far below our cost of providing the transport. The State’s Medi-Cal reimbursement rate is one of the lowest in the country, but it also has the highest operational costs for ambulance transports. What’s more, we are not subsidized by taxpayer funds like public agencies, and almost 80% of our patients pay nothing or below cost for our services. When you combine current reimbursement shortfalls with recent inflationary pressures, our Los Angeles division is on course to have an operational deficit of over $3.5 million.

With the support of our labor unions, including the United EMS Workers - AFSCME and National Association of Government Employees (NAGE), AMR and other ambulance providers throughout the State made requests to the legislature for a Medi-Cal increase tied to higher wages for EMTs, paramedics, and dispatchers. But despite a billion-dollar budget surplus no funding was approved in this year’s State budget for an increase. Instead, the State moved forward to increase fire department’s Medi-Cal reimbursement for ambulance transports to over $1000 even though taxpayers already cover the cost to provide these services. In addition, the legislature denied private EMTs and paramedics the healthcare worker bonus because they were determined to be non-essential to the COVID response even though private industry provides 70% of California’s emergency and non-emergency ambulance services.

“As we continue to experience the financial impacts of low Medi-Cal reimbursement, a tight labor market, and recent federal, state, and local policy decisions that have negatively impacted our ability to provide both emergency and non-emergency ambulance services, AMR has no choice but to work diligently and swiftly to protect our core emergency 911 operations to ensure we can meet the needs of our patients and communities we serve,” said Ken Liebman, Regional Director of Operations for AMR.

AMR intends to move as much of the workforce as possible from the impacted non-emergency division over to the emergency side of our operations in the County. AMR management will also work with the County and other stakeholders to minimize the impact on the healthcare system as they seek out other providers to cover the 28,000 yearly transports currently provided by AMR’s non-emergency division. 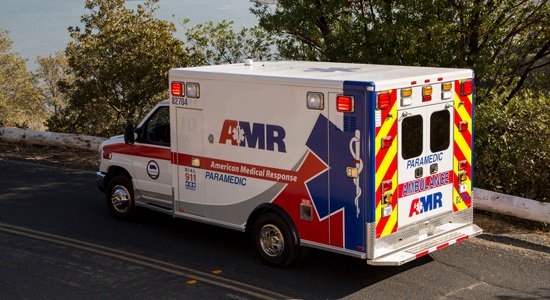